ANI_MATE is the performance of a kinetic animation machine. It involves the interaction between a computational system, a pneumatic apparatus, a tensile screen, and an archive of photographic stills, all of which are performed and manipulated by myself on stage. The machine effortfully performs processes of animation, physically stressing and releasing the screen’s membrane. The real risk of  material fatigue – and therewith possible destruction of the illusion – drives the performative tension.

As a kinetic structure and architectural object ANI_MATE is a spacious contraption that barely holds itself in fragile balance. The large, tilted tensile screen hovers above a low and elongated platform. The thin threads punctuate the fabric screen and connect the flexible membrane to the field of pneumatic actuators at the other end of the platform. Operating on exhaust air, the powerful machine takes the risks of “exhausting” itself in its delicate, yet frantic attempt to metamorphize a still image into life. Pneumatic forces move the tensile screen and with it the projected images of my body, amplifying the material action of stretching and distorting in an effort to make these performative and material dynamics tangible to the audience.

Wrestling with the messy domain of material beings and living images, the play unfolds as a shuttling between animation and stillness.

Funding: Ani_mate is supported by the Amsterdam Fund for the Arts 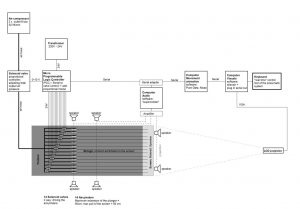 The pneumatic apparatus consists of a field of fourteen valves, cylinders, two air compressors and a system of branching air tubes.

The machine  movements are at times explosive and powerful pushes and pulls, and at others delicate and caressing articulations. Pressurized exhaust air extends and retracts the cylinders, creating a sound score due to the fluctuations of released and redeemed power.

The movements of the pneumatic apparatus are meticulously choreographed to pull the two-dimensional images at vital points of their surfaces so as to deform them into morphological shapes and three-dimensional figures, composed of inflected surface topologies.

As a performative stage machine, ANI_MATE embodies the deliberate confusion of the concepts of motion and non-motion, and respectively, living and non-living. It mingles the material associations of mesh, fabric and skin and produces constantly fluctuating points of contact between human movement and machine momentum, and between flat image and deep body.